Two elements of an apology

“We’re sorry that your flight was cancelled. This must have truly messed up your day, sir.”

That’s a statement of compassion.

“Cancelling a flight that a valued customer trusted us to fly is not the way we like to do business. We messed up, it was an error in judgment for us to underinvest in pilot allocation. Even worse, we didn’t do everything we could to get you on a flight that would have helped your schedule. We’ll do better next time.”

That’s what contrition sounds like. We were wrong and we learned from it.

The disappointing thing is that most people and organizations that take the time to apologize intentionally express neither compassion nor contrition.

If you can’t do this, hardly worth bothering.

But it is worth bothering, because you’re a human. And because customers who feel listened to help you improve (and come back to give you another chance.)

Its best marketing move all summer By Christopher Heine 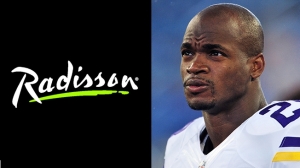 Yesterday may have been Radisson Hotels’ best digital marketing performance ever, thanks to dropping its Minnesota Vikings’ sponsorship in reaction to the team’s troubles with Adrian Peterson.

The hospitality brand decided on Monday night to cut ties with the National Football League franchise, after the Vikings momentarily reinstated Peterson, a star running back who had been suspended for allegedly abusing his 4-year-old son. The marketer immediately began to reap benefits from the move.

On Tuesday alone, according to Amobee Brand Intelligence, Radisson received enough social, Web and mobile impressions to account for 58 percent of its total online consumption (impressions plus mentions) for the last three months. If the Foster City, Calif.-based data provider’s analytics hold true for the rest of today, Sept. 16 and Sept. 17 will account for 81 percent of the brand’s total online consumption for the summer.

“So basically, Radisson gets a [full] quarter’s worth of free publicity for the move, all because they were the company during this current NFL [public relations] crisis willing to take the most definitive stand against domestic violence,” said Ammiel Kamon, evp of products and marketing at Amobee Brand Intelligence.

Here are other relevant stats from the last 12 hours, per Kamon’s company:

Earlier today, the Vikings announced that Peterson had again been suspended until the abuse case is fully resolved. That development came shortly after Nike revealed that it had withdrawn its sponsorship of the Pro Bowl player.

As controversy swirls around the National Football League, brand marketers are facing a difficult task: how to make a strong statement against wrongdoing like domestic violence and child abuse without jeopardizing their lucrative and mutually beneficial deals with the league.

For now, big advertisers have stopped short of taking the most aggressive steps, such as pulling their TV ad dollars or canceling major league sponsorships and contracts. Instead, most are publicly condemning alleged misconduct by NFL players, while promising to monitor the situation.

Nike Inc. NKE -0.17% said Wednesday it would suspend its endorsement deal with Minnesota Vikings running back Adrian Peterson amid allegations that the football star beat his 4-year-old son with a switch. Nike earlier terminated the contract of Baltimore Ravens star Ray Rice, after a video emerged of him hitting his then-fiancé in an elevator.

And in the latest case involving an NFL player, Arizona Cardinals running back Jonathan Dwyer was arrested Wednesday on aggravated assault charges related to two altercations in July involving a woman and an 18-month-old child.

Nike declined to comment on whether it was paring back any other NFL partnerships. The company supplies the jerseys for all 32 NFL teams, a contract valued at over $1 billion over several years. Nike spent $13 million on ad time during NFL telecasts last year, according to Kantar Media. Nike’s “demand-creation expense,” which includes sports marketing expenses tied to the NFL, among other endorsements, was $3 billion for the fiscal year ended May 31, the company said in a securities filing.

On Wednesday, Indra Nooyi, CEO of longtime NFL sponsor PepsiCo Inc., PEP +0.61% said she is “deeply disturbed” that the “repugnant behavior” of some players and the league’s mishandling of the cases is “casting a cloud” over the NFL’s integrity.

But Mrs. Nooyi also voiced support for embattled NFL Commissioner Roger Goodell and urged him and the league “to seize this moment.”

Many advertisers see the NFL’s telecasts as a vital component of their campaigns.

The games offer a reliable source of “eyeballs”—with more than 17 million viewers, on average—in a media landscape where viewing is increasingly fragmented. And since most sports is watched live, they don’t have to worry about viewers skipping through their ads.

“In a world where you can’t get a big audience anymore, where the hell are you going to go?” said one major NFL advertiser. “Obviously, we don’t condone violence against women, but how is it the right thing to do for our shareholders to pull out of the NFL?” 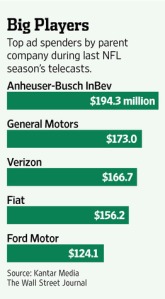 “As McDonald’s is a family brand, we’ve communicated our concerns to the league, and we expect it to take strong and necessary actions to address these issues,” McDonald’s said Tuesday. McDonald’s has no plans to pull back on TV ads, a spokeswoman said Wednesday.

Some advertisers have expressed nervousness about running ads during specific NFL games such as last Thursday’s matchup between the Pittsburgh Steelers and the Baltimore Ravens, which was the first Ravens game since the video of the incident involving Mr. Rice became public, people close to the situation say.

Brands “can’t turn a blind eye [to the alleged violence] if you are promoting a very wholesome culture,” noted McNeal Maddox, strategy director at branding consulting firm Siegel + Gale. However, it would be extreme for a marketer to cancel a big sponsorship with the league because of the specific actions of one or two players, Mr. Maddox said.

The NFL has struggled to address public outrage over the alleged player incidents. On the sidelines of an owners’ meeting in New York on Wednesday, Houston Texans owner Robert McNair told reporters that owners are unanimous in their support of Mr. Goodell.

In Minnesota, the Vikings said Mr. Peterson won’t play on Sunday and won’t participate in team activities. Mr. Peterson was indicted by a grand jury on child-abuse charges in Montgomery County, Texas. He turned himself in early Saturday morning and is out on $15,000 bond.Meanwhile, Carolina Panthers pass rusher Greg Hardy is off the active roster after a domestic-violence conviction. Mr. Hardy is waiting for NFL punishment and has declined to comment.

Mr. Rice was entered into a pretrial intervention program that will result, upon completion, in charges being dropped.

For Nike, the Peterson episode is the latest example of the risks athletes’ off-field behavior can pose. The company also terminated its deal with Olympic sprinter Oscar Pistorius after he was convicted last week of culpable homicide—the South African equivalent of manslaughter— in the shooting death of his girlfriend last year.

On Wednesday, Nike said regarding its suspension of Mr. Peterson’s deal, “Nike in no way condones child abuse or domestic violence of any kind and has shared our concerns with the NFL.”

The sports apparel giant has taken steps to mitigate risks from endorsement deals. According to a contract between one athlete and Nike reviewed by The Wall Street Journal, Nike retains the right to terminate the contract if “the commercial value of the athlete endorsement is substantially impaired by athlete’s commission of any act which shocks or offends the community…or which manifests contempt or disregard for diversity, public morals or decency.” It was unclear whether such a provision was in the Peterson, Rice or Pistorius contracts.

Douglas Logan, an adjunct professor of sports management at New York University, said such “morality clauses” became ubiquitous after the late 1990s incident in which boxer Mike Tyson bit the ear of Evander Holyfield. “People were getting very, very nervous in sponsoring long-term deals with athletes, like ‘What if I’m on the hook for a quarter of a million dollars and a guy bites an ear?’,” he said.

Advertisers have long had to deal with sports controversies. A long list of companies bailed out of their contracts with Tiger Woodsseveral years ago after his extramarital affairs became public. Recently, advertisers faced the choice of whether to pull ads from NBA basketball games involving the L.A. Clippers following controversial comments made by then-owner Donald Sterling.

Of course, advertisers can try to distance themselves by not relying on NFL players or football themes in commercials. But last year there were more than 50 TV ads that used NFL players, according to Ace Metrix, a research firm that tracks ad performance. Those advertisers included Nationwide Insurance, Duracell, Papa John’s and Campbell Soup.

Advertisers can’t make quick decisions when crises like these hit, because they have to know the full story, said crisis experts. “In the age of Internet and social media, we damn people more quickly and that is a real challenge for advertisers,” said Richard Levick, chief executive of crisis-management firm Levick.

—Nathalie Tadena and Joe Flint contributed to this article.